Snorkeling In South Africa - An Introduction 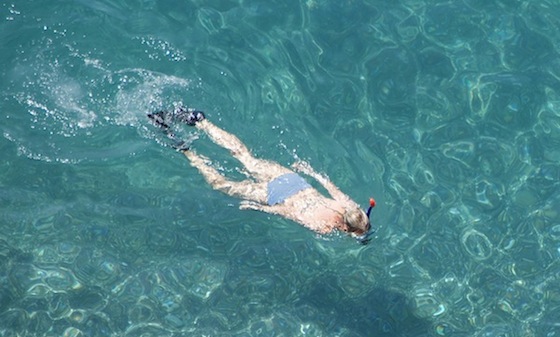 About Snorkeling in South Africa

Snorkeling in South Africa can be divided into two main areas, the warmer East Coast around KwaZulu Natal and the Cooler West Coast around the Cape Province.

The Snorkeling on the North East Coast of South Africa  is dominated by warmer water temperatures,  the water can be warm and pleasant almost all year round, yet if you're looking at snorkeling further south, towards the Cape Province, the water and can be a lot colder and less predictable than snorkeling in the warmer KwaZulu-Natal waters, but there are still some very interesting and unique snorkeling opportunities in the Western Cape, especially the chance to go snorkeling with seals

Many people opt for scuba diving in South Africa, as much of the snorkeling is limited to shallower inshore intertidal reefs. There are some incredible diving sites around, namely Aliwal Shoal, Sodwana Bay and cage diving with Great White Sharks in the colder Western Cape waters, but few venture in to the shallows, perhaps it's not marketed enough or people don't know how many great snorkeling spots that there are in South Africa's shallow intertidal waters.

Where to go snorkeling in South Africa?

The north eastern coast of South Africa is probably the most popular of areas to go snorkeling, mainly due to the warmer, more tropical waters (compared to further south) and great ocean wildlife, especially along the KwaZulu-Natal coastline.

Particular snorkeling spots in South Africa worth considering include

in the very far north of South Africa, bordering on Mozambique. The Kosi Bay Mouth has a small reef (just in the mouth) which is often considered one of the best snorkeling spots in South Africa. The area also has well organized snorkeling and canoe trips in the Kosi Lakes system. This is an easy safe shore entry.

Just South of Kosi Bay is also widely regarded as epic snorkeling. This area is difficult to get to, but well worth it. Try Rocktail Bay or Thonga Beach Lodge in Mabibi for access. This is another low tide, shore entry snorkeling spot

The shallow intertidal areas around Sodwana Bay, a very popular diving site, is excellent for snorkeling and generally offers great visibility. Snorkeling is best at low tide and accessed directly in front of the boat launching site at Jesser Point. The areas south of Jesser's Point also offer some great intertidal pools well worth exploring.

Cape Vidal is one of the closest points for snorkeling around St Lucia (the iSimangaliso Wetland Park) is a favourite (and probably most popular) snorkeling spot in South Africa. If you get this reef on a good day with little wind and low tide, the snorkeling can be amazing. This is a site best explored on spring low tides

Then south of Durban, the entire south Coast has some wonderful intertidal shallow snorkeling areas, Rocky Bay, near Scottburgh, is one of our favorite places to go snorkeling in South Africa - all these sites are intertidal snorkeling areas, so best visited on a low tide (preferably a spring low tide) with minimal sea swell.

The Eastern Cape of South Africa can also offer some gems, here the water is generally milder than snorkeling in Kwazulu-Natal but certainly warmer than the Western cape waters. The areas around East London have some excellent snorkeling spots, especially around Glen Eden

Further South in Cape Town, the water is cold and a wetsuit will be needed, but this area, although not tropical does offer some very unique and interesting snorkeling when in South Africa. The best recommendation, go snorkeling with seals, an experience you will not forget in a hurry

So many more snorkeling spots to mention

Snorkeling in Madagascar - Nosy Be

Snorkeling in Mozambique - An Introduction

Snorkeling In South Africa - An Introduction