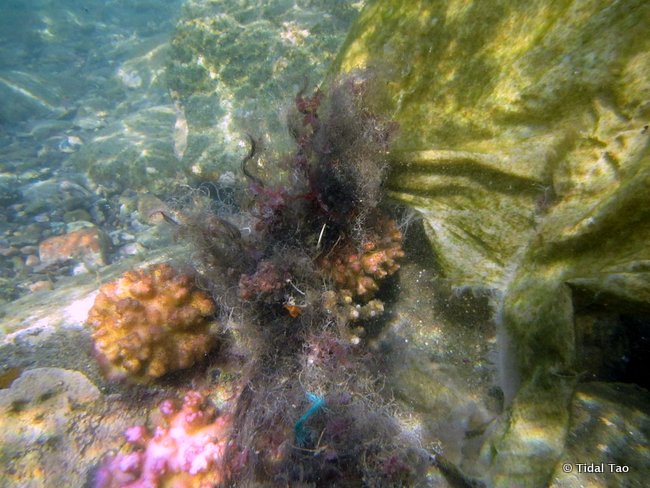 We recently begun a small program manually removing fishing line from patches of Coral growth in the tidal areas of Ballito, Salt Rock and Sheffield Beach.

Initially our intentions were purely aesthetic in nature, the fishing line (and there is a lot of it) just looked plain ugly. But then a reality begun to dawn, the fishing line we were finding was not just tangled in the coral, it was actually killing the coral. We begun looking even closer and found that some areas, almost half the coral growth was either dead or dying as a direct result of fishing line. The fishing line acts as a "trap" catching algage and other plant material which eventually just suffocates the coral. Well over 50% of any coral "patch" we find has been impacted by discarded old fishing line.

In many small pools that we have been cleaning out locally, we regularly see young children and their parents simply having fun with a small fishing rod, trying to catch little fish in the tidal pools, but under the surface, this rather innocent behavior was having extremely detrimental impacts on the coral life. We would guess these beach loving families would be mortified at the destruction they were causing. This fishing litter problem, combined with the impacts of coral bleaching, litter, extreme weather conditions, increased sedimentation, the rare few patches of coral still surviving along KwaZulu-Natal's North Coast could be a thing of the past very soon.

The good news is that by gently clearing the coral of fishing line we have noticed an almost immediate improvement in the general appearance and health of individual coral patches (we assume from removal of fishing line, the associated algae growth and sediments immediately get cleaned out) leaving the coral looking more colourful and "what it should be" with very little fuss.

Although, cleaning coral is a very delicate process and one can easily do more damage than good. We found this very handy set of tips & advice for clearing fishing line from coral areas on the Coral Reef Alliance Website www.coral.org (Below) Anyone wanting to get involved or assist us with any of our cleaning or awareness projects ....please give us a shout here or visit our "caring section" to find out more about how you can get involved!