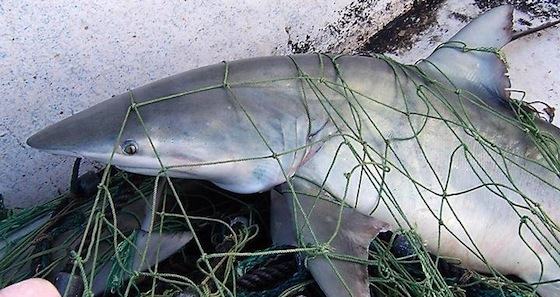 Besides the indiscriminate killing of Sharks, marine mammals and other biodiversity along the KwaZulu-Natal, South Africa coastline, It is no secret that many conservationists are not great believers in the shark net and drum line approach along the KwaZulu-Natal Coast.  And hopefully, soon, we will have a viable alternative (Side note: It's two years later and little has changed)

Shark nets do incredible damage to marine life along our coastline. In Richards Bay, the endangered Humpback Dolphin population is directly at risk from shark nets, it is hard to believe with all we know about sharks, including their dwindling numbers, their critical role in our oceans, and the small risk they actually pose to us, that the archaic process of killing these animals for bather “protection” still exists. But in KwaZulu-Natal, hundreds of harmless sharks - as well as turtles, dolphins and rays - still meet an untimely death every year as a result of the shark nets installed by KwaZulu-Natal Sharks Board (KZNSB).

While the nets have been responsible for the death of over 33,000 sharks in the last thirty years, less than 12% were targeted species (whites, zambezis, tigers). 25,000 harmless sharks were killed that did not pose any threat to bathers. However, their deaths do pose a threat to the health of the environment – and the economy. The nets’ bycatch is appalling during the same period: 2,211 turtles, 8,448 rays, and 2,310 dolphins. The nets caught 100% more dolphins and turtles and 800% more rays than Zambezis. Sadly, all species of turtles and many of dolphins are listed as threatened or endangered. (information: Shark Angels)

We have always maintained that if you want to save lives, take the money spent on these nets and teach children beach safety and swimming, each holiday season we hear about drowning children, almost on a daily basis. A lot more than we ever hear about shark attacks.

Having said that, some good news, a potential solution exists, an electronic shark repellant cable will be tested off Glencairn Beach in Cape Town from October 2014 by the KwaZulu-Natal Sharks Board. The cable emits a low frequency pulsed electronic signal, known to repel great white sharks. It will, if successful, provide the fundamentals for a system to be developed that would protect swimmers without killing or harming sharks and other marine animals.

During the testing period cameras on the beach and shark spotters will be employed to observe shark behavior close to the cable. Video footage and shark spotter observations will then be analyzed by scientists to see how the signal emitted by the cable affects white sharks.

There has been no indication on how long it could be before we see this system replacing shark nets along our coastline, but we certainly hope that the testing is successful and we can begin phasing these nets out sooner rather than later. For more information on the negative impacts of Shark Nets, read "Shark Nets, A Tangled Web Of Destruction"