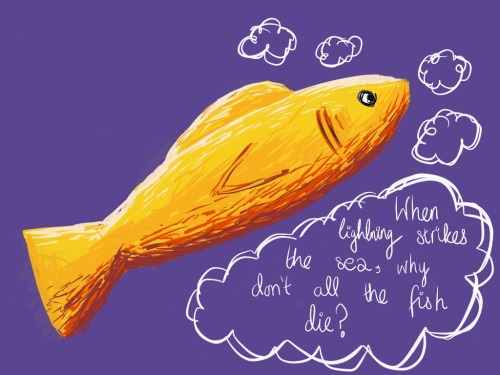 Have you ever wondered what happens when lightning strikes the sea? Do fish die when lightning hits the sea? It's an age old question, we done some digging around and this is what we found.

Lighting striking the sea is actually quite unusual

Firstly, and this was surprising to us, lightning strikes on the ocean compared to strikes on land is a rather unusual occurrence. The image below shows NASA's data on distribution of lightning strikes across the world in 2003. It is fairly clear that lightning on land is a whole lot more common than strikes out at sea, so the odds are already in favour of the fish not being struck in the first place. Although, some areas especially around the east coast of Southern Africa and South America do see relatively regular lightning strikes at sea. So in short, no, we don't see mass die off of fish everytime there is a storm. 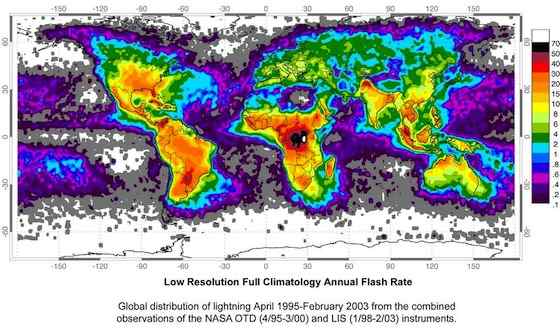 Do fish die from electrocution when lightning strikes the sea?

So in the unusual event that lightning does in fact strike the sea, do fish get electrocuted? Apparently not, unlike air, the sea is a very good conductor as it contains salt. Rather than creating an direct narrow, path concentrating the "punch", the charge from the lightning strike spreads out sideways and downwards in an expanding half sphere from the surface. Any fish within a few meters of the strike area would probably be killed but beyond that they would probably just feel a tingle. Fish also tend to be a bit deeper in the water and not at the surface where the current is concentrated. So again, the odds are well stacked in favor of the fish. So technically yes, if the fish is right there in the immediate area of the strike and in shallow water, the fish probably will be electrocuted, but only fish in a very small area near the surface. Glad we got that part of it answered.

What about animals at the surface like whales and dolphins?

So if fish are saved because they generally hang around a bit deeper than the surface of the sea, what happens to animals like whales and dolphins who are on the surface a lot and have a large surface area when lightning strikes? Well, we searched and could not find any direct evidence of this happening in the past. Although biologists agree that it is entirely possible that marine mammals do get killed by lightning. Some clever fella with way too much time on his hands done some math. He took the average strikes across the worlds oceans, compared it the surface area of the oceans, the number of whales estimated in the ocean, the time the are at the surface etc... and to cut a long story short, he reckons, yes, statistically whales must have been killed by lightning many times in the past few thousand years. But this is just a statistical probability, not much hard evidence out there for this.

Is it safe to go for a dive when there is lightning?

And what about humans, scuba divers in the water during a lightning storm? The answer here is a resounding NO and plenty of published information on the dangers of diving during lightning storms. Several divers have been killed by lightning in the past, most often as they surface in a thunderstorm. Why divers and not fish you may ask? Well, it appears that the diving tanks act as giant conductors and zap, bye bye. We guess that makes sense, a big conductor on your back, in water, no points "higher than you" ...divers are a sitting duck in a lightning storm.

So there you have it, no, the fish generally don't die en mass when lightning strikes. Lightning striking the ocean is quickly dissipated across the surface, but if you happen to be swimming about with a nice big steel conductor tied to your back like a scuba diver, you could well up your odds of being hit and in for a rough day. But still, it's way safer to be in the sea than playing a round of golf.