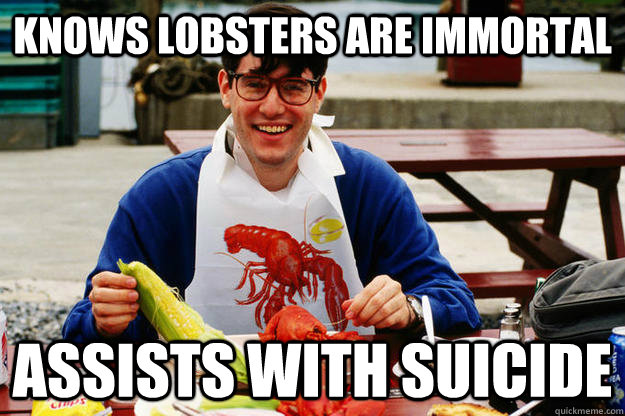 So, apparently biologists are open to the theory that lobsters don’t just die of old age. Ever since learning this I have had images going through my mind of two crusty old lobsters having it out on a chilly mountaintop, waving their giant old pinchers about, a classic song from "Queen" in the background adding to the tense atmosphere in this showdown.

One Lobster shouts boldly “There can be only one… I am immortal”, until someone cuts his head off, or in this case drops ‘ol Crusty into a pot of boiling water. Immortality, as with the Highlander, isn’t a definite as the word implies. You may not die, but you sure as hell can get killed.

And this is the case of the Immortal Crusty. Biologists have long suspected Lobsters of being rather special in that they (probably) do not die of old age. Other creatures certainly eat them when they are young, but as they get older and bigger, it’s pretty much just humans who can challenge their immortality, and I cannot imagine they are too pleased with this Achilles heel of theirs.

So how do they do it? It’s tricky, but here goes. Research suggests that lobsters may not slow down, sag, or need Viagra as they age, they just don’t get fat, lazy, loose interest in sex and die like we do. In fact older lobsters may be more virile than younger lobsters, think Hugh Heffner in the sea. This longevity may be due to an enzyme called telomerase. Telomerase (in simple terms) helps make sure that your cells remain intact and multiply properly, an essential ingredient for growing up. Telomerase is at it’s peak in most animals during the early development stages but gets less and less as you age, resulting in cells not multiplying properly, old age, wrinkles, impotence, knitted cardigans and an intolerance for noisy children. However, unlike most creatures, lobsters seem to have as much telomerase as adults as they do when they are young, if not more. Cool.

So what does this mean? Is there a giant ancient, wise old lobster somewhere out there, the size of a small bus and a harem of adorning lobsteresses vying for his attention? Perhaps. We simply cannot say there isn’t, but we do know that the largest lobster recorded was caught off the coast of Nova Scotia, Canada, and weighed over 20Kg’s it was well over a meter long long. Scientists think it was around 100 years old.

we do know that the largest lobster recorded was caught off the coast of Nova Scotia, Canada, and weighed over 20Kg’s it was well over a meter long long. Scientists think it was around 100 years old.

This immortality trick of ‘ol Crusty could be extremely handy if we can successfully introduce a similar mechanism into human cells, there's the possibility that we could lengthen human lives indefinitely. Scientists at the University of Copenhagen have already mapped telomerase, the first step towards understanding what they call "the cellular fountain of youth." The project may soon help us develop cures for cancer — a disease that uses telomerase to replicate itself throughout the body. Sweet, 7 million humans and counting, add a dose of extra longevity, all gagging and drooling when they walk into a restaurant for the sweet white flesh of “ol Crusty himself. Ironic, don't you think?

One would think that this trick of immortality should ensure your species is sure to be successful? But mother nature didn’t plan for homo-sapiens quite enough. Lobsters have not always been considered chic eats. In 17th- and 18th-century America, they were so abundant in the northeast that they were often used as fertilizer. Laws were even passed forbidding people to feed servants lobster more than twice a week. However, improvements in transportation infrastructure in the 19th and 20th century brought fresh lobster to distant urban areas, and its reputation as a delicacy grew. Stymieing Mother Nature’s ultimate trick to the point that populations of commercially important lobster species are thought to be declining, some shocking studies imply a 50% drop in populations over the past 10 years! Pretty shocking for what is a disease-resistant species. Not so immortal now are we ‘ol Crusty?

So next time you pop into your local seafood restaurant and pick out the oldest and biggest Lobster you can find, you can smile to yourself, knowing full well that the animal you’re about to eat has beaten all nature’s odds and even with the gift of immortality, you have won, you are superior. When ‘Ol Crusty gets lowered into that boiling water, shouting out in defiance that that he can not die, you can sit back and smile knowing that even immortality isn’t enough to protect these creatures from us humans. Respect.