Starfish are very cool critters, besides generally being beautiful to look at, they have some fascinating habits and behaviour that makes them very unusual and fascinating creatures. Here are our top six facts about Starfish that we think are amazing.

Starfish are not fish.

Although starfish live underwater and are commonly called "sea stars," they are actually not fish. But you knew that, we are sure. They do not have gills, scales, or fins like fish do and clearly don't swim like fish. While fish propel themselves with their tails, Starfish have tiny little tube like feet that work in unison to help them move along

Starfish belong to the Phylum Echinodermata. That means they are related to  sea urchins, and sea cucumbers. All echinoderms have five-point radial symmetry, their bodies have five distinct sections. Look closely at any sea urchin (especially underneath) and you will notice the same "star shape" is very prominent

Starfish come in many varieties

There are well over two thousand species of starfish in the world! That's a lot....and some species come in a huge variety of colours. Our point, for ocean enthusiasts, Starfish alone could keep you busy for years to come.

Amazingly, Starfish can regenerate lost arms. This is useful if  threatened by a predator - it can drop an arm, get away and grow a new arm. A bit like a lion grabbing your leg, biting it off and you run away to grow a new one, no harm done. Starfish have most of their vital organs in their arms, so some can even regenerate an entirely new animals from just one arm and a portion of the star's central disc. The bad news, this can be a slow process and take up to a year to grow back. Not so cool.

Yes, that's right, Starfish have eyes. While they can't see as well as we do, Starfish have an eye spot at the end of each arm. The eye doesn't see much detail, but can sense light and dark. Handy.

Yip, no accidental bloody noses for starfish, instead they have a "Water Vascular System"  a system of fluid-filled tubes and chambers that connects with the tube feet. The fluid in the water vascular system is under pressure, giving the tube feet their shape. It's tricky - read more about this system here (not for the feint hearted)

Where to find Starfish

In KwaZulu-Natal, finding big starfish while snorkeling can be rather tricky as they are not common, as you get further north to the more protected waters of Mozambique, you start to see a much larger variety. However on the East Coast of South Africa's rocky shores, be sure to look out for the Dwarf Cushion Star 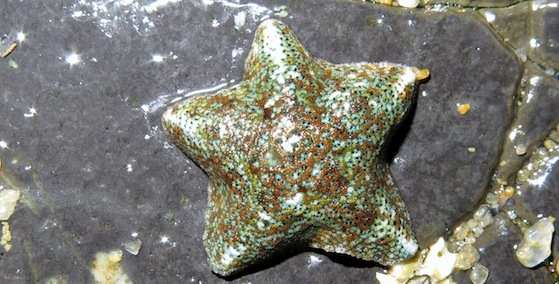 Cushion Stars range from a cm across to 4 or 5 cm at most, so rather small and can easily look like a shell if you are not looking closely. So keep a close eye on those intertidal rocky areas and you may just be lucky.