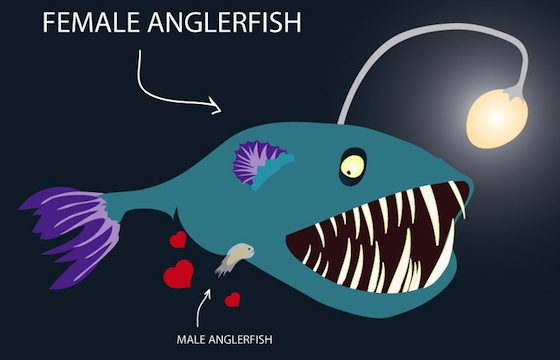 Number one: the nudibranch, do not leave your penis laying about.

Tired of your partner just leaving things laying around ……well, imagine if they left their penis laying around? The  Goniobranchus tinctorius (a nudibranch) does just that. These nudis are hermaphrodites, they have both male and female sex organs. When they mate, both will insert their penises into each others vaginas. Fair enough, but what happens afterwards is where it gets a bit weird, both slugs will then discard their penises, which just float off into the ocean and they just grow a new one, ready for use within 24 hours. Try not imagine this scenario in the bedroom OK, it’s not pretty….and oh yes, another good reason to be careful of swallowing sea water, you never know what is floating around!

So you think your partner is leaching off you and being a bit clingy? Could it be as bad as the Anglerfish? The male Anglerfish live to breed and breed only. Talk about a one-track mind. It’s tricky finding a mate in the deep oceans, so when you do, you need to hang onto her. The male Anglerfish will sniff out a female, go along and bite her, releasing an enzyme that literally fuses them together. The male (much smaller than the female) literally becomes a “growth of sperm” on the female and when she releases her eggs, the sperm is there to fertilize them. Some females have been recorded having up to six different males growing off her. Suddenly your partner is not so clingy anymore are they

Number 3: The cuttlefish – trick them into bed

Everyone has that friend that pretends to be gay to “get with the girls” …..well no one does it better than the Cuttlefish. Male Cuttlefish that are “weak” and battling to find a mate will use their camouflage techniques to make themselves appear to be a female. With this done they can get in amongst the “stronger” males and literally sneak in and mate with one of the waiting females. Just goes to show, brains are better than brawn. Check out the clip below to see just how this trick works....genius.

Number 4: Flatworms, battle of the penises

Seems slugs just have a knack for doing odd things with their penises. Flatworms, like many other slugs are hermaphroditic and can take on either male or female roles. Unable to have a logical conversation about the matter, the flatworms solve the problem in the only way they know how: by trying to stab the other with their penis and the first to inseminate wins. Romantic hey. Want to see this in action, check out the video clip below of this unusual mating behavior.

Nothing quite beats “unromantic” like bringing your buddies along to a night of passion. Sea hares, don’t do well here, like all sea slugs, they are hermaphrodites. And to solve the “who is male, who is female problem” they've become especially efficient hermaphrodites! When sea hares mate, they form a mating chain of several animals! The sea hare in front acts as the female to the one directly behind it. Sometimes, they even form a giant circle, with everyone inside happily mating the day away. We actually get to see this happening quite regularly on our night snorkeling safaris

Number 6: The barnacle, the root of all penis envy

The dull barnacle, what part of their sex lives could possibly be interesting? Well, who says size doesn't count? Because Barnacles tend to be stuck in one position all their lives mating is tricky. A bit like trying to meet your perfect partner, but you never leave your couch. Yes, very tricky, but if your penis is longer than your body, well that could generate some interest. And the Barnacle’ s solution, turns out, is brilliantly simple: the barnacle has an inflatable penis that is up to 50 times as long as its body. In fact, it has the longest penis in the animal kingdom, relative to body length! They just reach across and do the deed with the first female it’s penis finds. Yes, finding a mate using your penis. It happens.

Number 7: The prize for most romantic ocean creature, the Seahorse.

So if you’re feeling totally despondent about love in the natural world, we have some reprieve, the Seahorse, possibly one of the most romantic animals in the ocean, every girl wishes her guy was like this. Many seahorse species will mate for life. Rarer still, they are among the only animal species on Earth in which the male bears the unborn young. Male pregnancy frees the female to make more eggs straight away and so reproduce quicker. But it gets better and some good tips for valentines day here folks…..Seahorses engage in an eight hour courtship dance which includes spinning around, swimming side by side and changing colours (Could you call this tantra?) After the courtship and mating, the female seahorse releases up to 50 eggs into a pouch on the male’s abdomen. You can’t imagine this scenario at home can you?

So there you have it, from plain parasitic partners, to seriously untrustworthy penises to good old married for life, when it comes to romance, the ocean has it all.