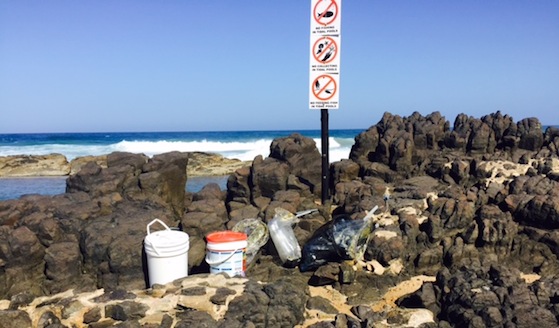 But, what most people don't realise and should find disturbing is that this is happening on our local beaches. Right here in Ballito, the Wildlife trade of fish for marine aquariums it is out of control and adding huge pressure to an ecosystem already under strain. We spend a lot of time on the beach and see a lot of poaching, but the trade in aquarium fish is by far the most disturbing thing we see. And if you love your coastline, you should be concerned too.

Here are ten reasons you should be very concerned about marine aquarium collecting on our coast and what you can do about it.

According to WWF, for every one fish that makes it into a marine aquarium, nine will die. That’s a mortality rate of 90% - based on that alone; the collecting of wild animals for aquariums should simply be banned. That's an unacceptable rate of killing.

Two: Sensitivity of our tidal zones

Our tidal zones are nurseries and small reef fish play a huge role in maintaining healthy tidal zones. You remove the “young fish”. …Continuously…. well, it doesn't take a rocket scientist to figure out what happens next. The moment an animal is removed from an ecosystem it no longer plays a role in that ecosystem. Ecosystem eventually stops working. Simple.

Fish have no memory; fish do not feel pain, forget that. It’s nonsense. Dr Cullum Brown, the world’s leading expert on fish behavior confirms that “fish experience pain just like any other animal, they have memories, they have been known to use tools, they have complex breeding systems and very advanced cognitive behavior.” Taking a fish out of it’s natural habitat for a fish tank should be considered just as cruel as taking any other animal out of it’s natural habitat and caged.

Five: Damage to our coral

Consider other impacts, Featherduster worms bore into coral heads, and then stick out their dusters to filter-feed. Aquarium hunters “collect” featherdusters by smashing coral. We have seen it. Other methods include shoving a long metal bar into gullies and overhangs to scare anything and everything out into the open …and of course, may we remind you, chemicals.

In countries like the Philippines, over 90% of reef have “absent” species, species that are no longer seen due to over collecting for the aquarium trade. In Hawaii, a range of species has seen plummeting populations (some as high as 70%) due to marine aquarium collecting. The same thing is happening here, we just do not have the baseline data to let us know how bad the problem is. Simply put, something could go extinct here and we wouldn't even know it.

99% of marine aquarium fish come from the wild. 99%. So don't be caught out by claims of “we are helping conservation with captive breeding programs” – a very small number of fish will ever breed in captivity. It’s a never ending cycle and never ending demand.

A permit from the post office (R94) makes this legal. However, these permits only allow for personal collecting, not commercial. Most collectors we see are from out of town and collecting on a commercial scale, for sale online, between “club members” and the “unknowing public”

Nine: Frivolous use of wildlife

Very few marine aquarists can replicate the “ocean” ….that’s why 90% of these poor animals die within a month. Would you catch birds in your garden and pop them into a cage knowing you can’t feed them properly? If you need a fish for food or an animal to eat, that's one thing. But for an ornament, that's a frivolous and wasteful use of wildlife.

Ten: We don't know the full scale or impacts

The trade in fish for marine aquariums is simply cruel and devastating our coastline.  We have no idea of volumes going out and we have no idea of local reef fish (and other animals) populations and populating trends nor the impacts of collecting practices (such as the use of chemicals.) - we do not know the full scale of this trade (as it's very unlikely anyone would report accurately what they take) In environmental circles there is a principle called the "precautionary principle" .....certainly not being applied here.

Do you really want people of the same caliber as drugs dealers and weapons dealers along our beaches, taking the wildlife we enjoy and value so much? And trust us, we have spoken to enough of these people to vouch for their aggressive, unscrupulous personas! These are not "nice people". Then again, one can't realistically expect "nice, good people" to be involved in the wildlife trade.

What can you do?