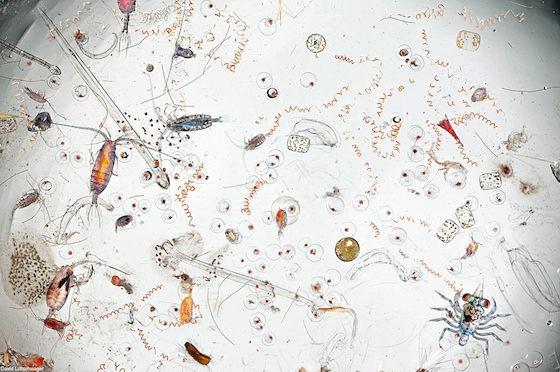 You'll be suprised by how much life is in a single drop of seawater! Nope, this is not a drawing / illustration, this is a photo of a drop of sea water magnified 25 times.

You know when you’re messing around in the sea and accidentally swallow a big gulp of sea water? Well, I hate to break it to you but you just got a lot more protein than you bargained for. National Geographic Photographer David Littschwager captured this incredible shot of a single drop of seawater magnified 25 times.

...and who know's how much even tinier stuff there is in there too.

What happens when you drink Seawater?

Interestingly, after some searching around we discovered that these micro-organisms rarely have negative impacts on human heath, the only time when you may get ill from sea water is normally a result of bacteria and organisms that end up in the sea from our land based pollution.

The actual problem is salt, not bacteria or microorganisms.  When humans drink seawater, their cells are thus taking in water and salt. While humans can safely ingest small amounts of salt, the salt content in seawater is much higher than what can be processed by the human body. Additionally, when we consume salt as part of our daily diets, we also drink liquids, which help to dilute the salt and keep it at a healthy level. Living cells do depend on sodium chloride (salt) to maintain the body’s chemical balances and reactions; however, too much sodium can be deadly.

Human kidneys can only make urine that is less salty than salt water. Therefore, to get rid of all the excess salt taken in by drinking seawater, you have to urinate more water than you drank. Eventually, you die of dehydration even as you become thirstier.