There is no romance here, no candlelit courtship, no lifelong bonding or any signs of monogamy, no gentle caressing or getting to know each other, just the uncomfortable truth about the kinky sex life of sharks.

So we know that Octopus use one of their eight legs to do the naughty, Flatworms fight it out with their little appendages, Seahorses reverse roles and Oysters just go on the prowl, but what do sharks get up to while we are not watching? Here is everything you need to know about Shark Sex so that you'll never have to wonder again .....and it's not pretty.

There are also over 400 species of sharks in the world and when finding some answers for this article, we quickly realized that what we do know about Shark Sex is limited to a handful of species....it's not always easy eavesdropping on many species of sharks that scientists hardly ever get to see, so this is probably just the tip of the iceberg in terms of what sharks actually get up to.

How often do sharks do the deed?

It seems that timing is not really an issue. And as you guessed, if a shark wants to do it, he probably will. According to George Burgess, sharks do it s often as possible; "Unlike swans, who mate for life, shark sex happens when it happens, “It’s like 1 o’clock in the morning, and the bar’s closing. Male sharks can sniff out ovulating females, who give off pheromones (chemical signals) when they’re ready for mating." As a general rule, the females don't have much say in the matter either, it is pretty much rape.

How do two animals with big teeth "get it on"?

There is a lot of "teeth" involved here, so much so that female sharks tend to have thicker skins than males and bigger bodies in order to withstand the results of a male shark trying to hang onto her with his teeth (it's tricky when you don't have hands) ....But first, you need to get to know some shark anatomy. 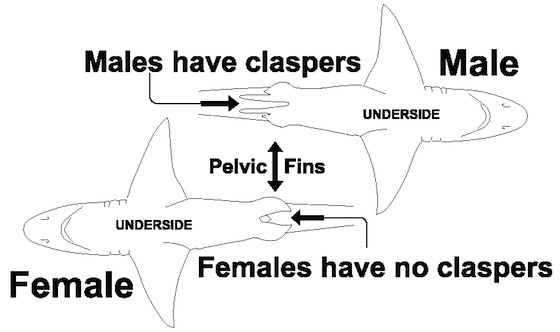 The important part here are the two "claspers" that male sharks have - these are basically the shark equivalent of a penis ....and he has two of them.....yes, don't go there, but you will be glad to know that he uses only one at a time, depending on which side of the female shark he finds himself. The male inserts his clasper into the female’s cloaca, yes, another nice name, and deposits his sperm. The other clasper is used to help "holding on" .....quite a trick for a penis. Interestingly, these claspers are made of cartilage (a similar sort of "soft bone" your ears are made of, this is what makes sharks "sharks" and not like other bony fish) - and this brings another useful trick to the table, because cartilage is quite hard anyway, Mr Shark never needs to worry about needing Viagra.

How long does it take?

We actually could not find a definitive answer for this question but we did find some YouTube clips of sharks "doing the deed" and as they say in the clip....... "it's all over in seconds" - but what they loose in "time" seems to be made up with regularity.

Being pregnant for a shark isn't all fun and games either. Some sharks (about 40% of species) will lay eggs in neat little pouches (sometimes called Mermaids Purse) and then leave it at that, other species will hatch their eggs internally and in some species, the first fertilized egg will develop and proceed to eat any other eggs as they come down the fallopian tubes . . . these little guys come out with fully formed teeth ready to go, it seems munching on your brothers and sisters in the womb can be useful.

So there you have it, it's tough being a shark, even tougher being a female shark, but at least now you know how to spot a male shark.