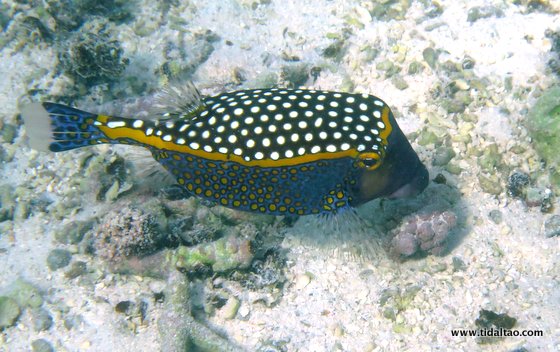 Boxfish are generally a very pretty, colourful family of fish belonging to the family, Ostraciidae. These include cofferfishes, cowfishes and trunkfishes. But did you know these cute little critters are rather deadly?

Boxfish feeds on molluscs, crustaceans, fishes, tiny sand-dwelling worms and algae. And this is where that cute little face comes in handy, It uses its mouth to blow tiny jets of water into the muddy or sandy bottom, stirring the small invertebrates to feed on them. Males are often more colourful than their female counterparts. Boxfish are also slow-swimmers that move primarily by sculling with their dorsal and anal fins, also very curious and easy to approach in the water. But don't be fooled, these guys have impressive powers of maneuverability, what they lack in power and evasive skill, they make up for with precision, being able to turn on the spot and dart into protected overhangs and holes in the reef.

Their bodies are encased with armor plating, excellent for deterring would-be predators, but this is where it gets interesting, they also have a chemical defense system. This consists of a potent toxin, known as ostracitoxin, which they exude in their slime when they are stressed..... and as for their bright colours, this is a very typical warning sign to would be predators across the animal kingdom. So…big deal, right? Lots of things in the ocean are toxic or venomous and have warning coloration; everything from lionfish to sea slugs. What makes boxfish toxicity any different? The answer comes down to two things; 1) the toxins are chemically unlike any other known fish toxins, and 2) the toxins are used in an entirely different way, they don't sting or need to be touched or eaten to be toxic.

Pufferfish for example, and most other creatures in the ocean that are "endogenously toxic" - defend themselves by having the toxins right in their very bodies. They saturate themselves with the poison, perhaps taking on a foul taste and/or sickening whatever animals are silly enough to try make a meal of them or in the case of Dolphins who have been known to get "High" on these toxins, yes, deliberately High - check it out here. But boxfish, when alarmed or  being eaten, secrete their own toxin in a slimy mucus that oozes from specialized skin cells all over their body. The clear, toxic "ooze" immediately disperses into the water , creating an invisible cloud of death surrounding and trailing an inevitably spooked little boxfish.

Although these toxins appears to have evolved to specifically combat gilled predators like sharks or rockcod, adverse effects from the toxin have been reported in mammals in laboratory experiments, and there are reports of severe poisoning in humans who attempted to eat cooked boxfish....and (good news for boxfish) these toxins cause havoc in Marine Aquariums, often killing everything in it.

So the moral of the story, pretty, small, funny shape, don't mock them, they are secret ninjas of the sea.