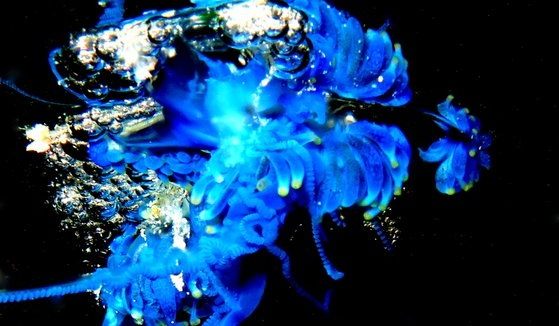 The dreaded Bluebottle, also known as a Portuguese man o' war (Physalia physalis) or in some countries aptly named "floating terror" ....we often see these guys washed up on the beach during periods of heavy north east winds in summer and for the most part, a bathers worst nightmare. But Bluebottles, despite their nasty sting are rather fascinating creatures.

Bluebottles are not Jellyfish ...they are not even single animals, they are actually a colony of organisms.

Even though they resemble jellyfish with their long dangly "stingers" - Bluebottles are in fact a totally different family to Jellyfish called Siphonophores. They are not actually a single organism or animal, but rather a colony of specialized minute individuals called zooids. These zooids are attached to one another and function as a "team" to create what looks like a single animal. Some of the zooids in bluebottles are responsible for the float on top which is a single individual and supports the rest of the colony. The tentacles are different zooids responsible for  the detection and capture of food and send their prey to the digestive zooids. and finally a set of zooids responsible for reproduction. These four organisms all work together to give us Bluebottles and can not survive without each other! The ultimate in teamwork

Where does the name Portuguese man o' war come from?

This cool alternative name for Bluebottles comes from a type of Portuguese war ship from the 15th century called the man-of-war or caravel. It had sails similar in shape to the triangular bladder of the Portuguese Man of War, also called Caravela in Portuguese. This nautical theme is even extended to the collective noun of Bluebottles ..... a flotilla of bluebottles

Bluebottles are not ambidextrous.

What an odd things to even say. But this is a rather interesting fact about Bluebottles, some are "left handed" and others are "right handed" - These creatures drift along the oceans and are moved by wind. But the direction of their drift is not entirely determined by wind alone. The animals come in both “left-sided” and “right-sided” variations. A left-sided Bluebottle drifts rightward from the direction the wind blows, whereas a right-sided one drifts leftward. This results in a more even distribution of these animals throughout the oceans....a truly remarkable adaptation.

Self Defense, more than just a sting

If a Bluebottle encounters danger or threats when floating on the surface, it can deflate its sails (the floating bit) and go into submarine mode for a while. On the subject of self defense, these stings are not like jellyfish stings, so what works for jellyfish stings won’t  work here. If you are stung by a Bluebottle, do NOT pour vinegar on the wound in hopes of neutralizing the toxins. Bluebottle stings use a different chemical to jellyfish stings, and vinegar just makes it worse. Fresh water isn’t much better either. After removing any bits of tentacle from your skin (with tweezers), use salt water to clean the wound. It’ll still hurt like all hell for a bit, but, hey, sometimes playing in the ocean has its price. You'll live.

There is a nudibranch specially adapted to eating just Bluebottles! 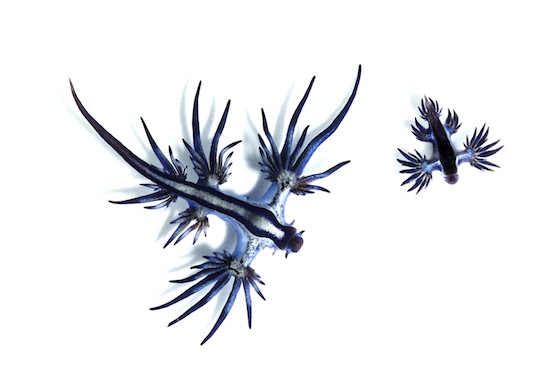 This nudibranch, Glaucus altanticus is also known as a Blue Dragon or Blue Sea Slug can pack a sting of it's own thanks to it's appetite for Bluebottles. Bluebottles are their favorite food! Not only can they eat the tentacles without being harmed, they even pick out the most powerful stinging cells that they can find. Once eaten, the nudibranch's stomach somehow knows not to digest the stinging cells. They are instead moved into the tips or "finger" areas. Here, the stings are stored for this nudibranch to use against predators. They are even more effective than they were on the Bluebottle since the Blue Sea Slug can select the very best ones and leave the less developed ones alone.
Find out more about Bluebottles, their stings and what to do here...in our guide to stuff that stings